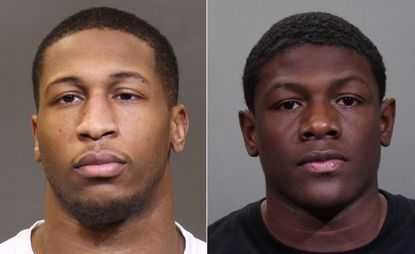 Well today, times are different. It’s not like there still aren’t people who blame the victim and will do whatever they can to save face regardless of evidence. But there are millions who are willing to speak up and stand in solidarity with victims and tell their side of the story to help corroborate another victim who is in need of validation. Because, yeah, that happens. We all need each other and if someone isn’t being looked at as a credible victim because the perps lawyers have slaughtered their character and thrown their past up to a jury, there is a need for others to come forth and say, “we got you”, #metoo. Which is what that means. And its not just for girls, its for guys too. Because men are victims of rape and sexual assault as well.

What I am proud of in this story, it’s being caught EARLY. And that’s what we need to do. Stop rewarding bad behavior because someone can score points and run a ball. Regardless of what they used to be, that’s not what they or who they are now. We hear all the time that some boy was good and spotless and never harmed a fly. And yet his first crime is rape or murder or eating people, or even being a serial killer. Well he was a good boy. He finally got caught though and he is going to prison. This isn’t an attack on black men. It’s an attack on horrible behavior that has been ignored for years. Coaches, parents, teachers can know that a child is fucked up in the head, but will be so quick to overlook his bad behavior because he can play basketball or football. These boys are never held accountable and while they are in high school or college, they skate by and never face up to their actions. Their principal covers for them. The dean keeps quiet, the coach turns the other cheek. Well enough is enough. We have to start holding them responsible because what it does is teach them that they can rape, kill, steal all they want and that they will be protected. Eventually, they go off to the NBA OR NFL and we hear stories about gang rapes. And all of that could have been avoided if we had punished them as young men.