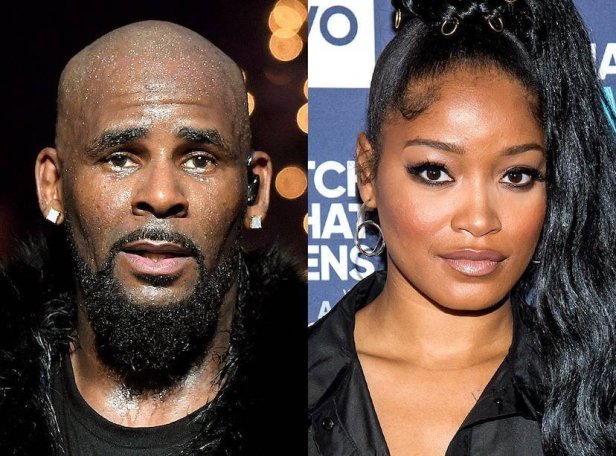 “I have spent the last hour crying. As a student of R. Kelly’s for the time I was and having been around his light and understanding the obstacles he overcame as a child to actually be birthed into the musical genius he is today… All to put others through the same darkness he was running from is the most disheartening thing to accept,” she wrote to her followers. “Many people experience hardships and do not allow themselves to find freedom through their passion enough to shine a light.”

Keke continued, “R. Kelly received that grace from God. God blessed him to vindicate his childhood shortcomings and yet still he has slapped God in the face by his actions towards these women. I am hurt and saddened because he could have been a blessing to these women but instead he repeatedly took advantage and that I cannot accept.”

The most embarrassing thing is when you credited someone only to find out that they were a MONSTER.

Imagine how Eddie Murphy felt after giving Bill Cosby credit and telling the world that he admired him or possibly inspired by him to become a comedian. Then you discover that he’s a serial rapist who drugs his victims.

Omg I’d want to slap someone in the face. Then there’s LADY GAGA. LOL POOR LADY. Making songs with Robert Kelly, doing duets, gyrating with him. I’d literally want to sue him after this. But you know, Lady Gaga is a victim of sexual assault. THAT’S why she’s attracted to him. I mention this in another blog. Women tend to chase what’s familiar to them.

You really can’t say Anything good about anybody these days.

Imma say this. IF you knew Kelly after the allegations that he was having sex with a minor And filming it, basically you deserve what you get. Even myself. But I was 19 when all That stuff came out. I hardly even followed the news. But I did stop listening to his music for sure. I admit though, I did come around later to tolerating his existence and truly enjoying the song, When A Woman Loves, but yeah, that’s all over. With these new stories about him, I realize that he never changed. People don’t change. They just find different ways to continue their bullshit. He’s the same as he’s ALWAYS been. Religion allowed to me forgive him. But today, HELL NAH. FUCK that nigga. 😑😐😐 he ain’t shit.

WHO cares about your talent if you’re a rapist?!? I’m tired of people bringing up how genius he is. I don’t give a damn. He’s forever gonna be A sicko to me. Now maybe your God commands you that you forgive him and tells you that Robert Kelly will have a place in heaven if he repents. Well listen to this, WHEREVER that man is, is a place I DON’T WANT TO BE. I’ll take My chances in hell. Apparently, the only people who will be there are those who didn’t accept Jesus as their Lord and savior. See you in hell. 😄😄😄🤣🤣🤣🤣😂😂😂😂😂😂🤔🤔

Im not joking. There are way too many murderers and pedophiles and rapists going to heaven. They keep asking God to forgive them and he keeps doing it. Nah I’m good. The Bible literally says, Whoever calls on The name of the Lord, shall be saved. Nope nope nope, Jeffrey Dahmer, Ted Bundy Robert Kelly, Bill Cosby, Donald Trump, all them going to heaven? 🤔🤔🤔