Dekari Castell, 22, admitted to police that he hit his daughter, Kali, twice in the head with an open hand, an affidavit said.

Kali was taken to the hospital on Sept. 13 after paramedics were called to the Lescot Lane home. Police say she died the next day. An autopsy showed Kali had skull fractures.

Castell told police he was “highly stressed as a result of being without power during the hurricane and that his daughter would not stop crying,” his affidavit said. He said “frustration” caused him to hit her. 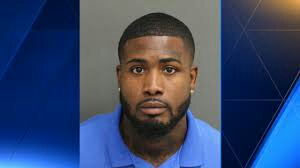 Omg I’ve been told to TEST everything in a stressful situation. But my goodness this story rocks me to the core. No utilities caused this?

Castell’s mother Kari Castell said in an interview with the Orlando Sentinel on Sept 15 that her son loved Kali and he would never hurt her. She declined comment on Monday.

A mother never wants to believe her child could do this. But he confessed to this. This man is a monster. He broke a child’s FEMUR!!! A FUCKING FEMUR! How? How? Then this poor mom. And yes I’m trying to have sympathy for her, especially if she didn’t know that this man was capable of this. Oh WAIT!!!! SHE DID KNOW HE WAS ABUSIVE!!! LOCK HER STUPID ASS up TOO. And if this mom has any other children, REMOVE THEM FROM THIS PSYCHO BITCH. How did you not know that this was happening? If you heard crying and all of a sudden didn’t hear crying anymore, WHAT HAPPENED? Aren’t you supposed to go investigate? Aren’t you supposed to actually use you maternal instincts? And then to give the exact same story that her baby daddy gave? She’d rather defend this piece of shit than to defend and protect her baby.

If it were me, I’d be in jail right now for beating his ass!

And he lied and said that his 4 WEEK OLD INFANT squirmed out of his arms?!! Really? Really?? Infants don’t squirm. Either you’re holding them securely or you’re not! So he’s already been known to cause major harm to a baby and yet he does it again? And this woman who calls herself a mother just acts like she’s so inconsolable and can’t answer questions about what happened to her baby.

Also this piece of shit is quite the catch to these ghetto bitches.

All on the Facebook tags there are stupid girls talking about how fine he is.  Who is looking at his facial features after knowing the HEADLINE you dirty foot bitch.  Like really?  I got so mad reading the posts of the girls that decided to share this tragic story. 90% of the posts didn’t mention any concern for this baby at all. Just a missed opportunity to get screwed by this bag of trash.

Look at this foolishness.  I usually don’t do black news because I just can’t stand ignorance. But the majority of the disgusting comments came from dumb black women.  Yall hoes reaching an all time LOW.

Orlando police say a 22-year-old father has now been charged with first-degree murder after his 6-month-old daughter died.

Dekari Castell’s daughter was not breathing on Wednesday, Sept. 13, and when her mother, Tia Gary, called 911. She was taught how to perform CPR, according to the affidavit, which added that it was not successful and the child was taken from the home on 1157 Lescot Lane to the emergency room at Arnold Palmer Hospital for Children.

That address is the same one where Markeith Loyd, accused in the shooting deaths of pregnant ex-girlfriend Sade Dixon and Orlando Police Lt. Debra Clayton, was hiding in the night when he was caught and it was abandoned at the time.

The child was placed on life support, but was declared dead on Thursday, Sept. 14. Brain scans revealed that parietal skull fractures and subdural hemorrhages were discovered, the affidavit mentioned.

Authorities tried to speak with Gary and Castell on the day their daughter was brought into the hospital, but they both stated that they were too “inconsolable” to talk.

The following day, Dr. Jennifer Park of the District Nine Medical Examiner’s Office conducted an autopsy on the child and verified that there were skull fractures in the brain scan.

She later told authorities that she had found a depression on the ride side of the child’s skull that could not be caused by a flat surface like a floor and would indicate the child was struck, the affidavit showed.

When authorities looked into Castell’s background, they discovered that he was investigated on Sept. 26, 2016, by the Florida Department of Child and Family’s Child Protection Team after his 4-week-old son was taken to a hospital for a broken femur bone, the affidavit disclosed.

“During this investigation, Dekari admitted that his son had squirmed out of his grasp and began to fall. Dekari caught the child by his leg causing the fracture,” the affidavit showed, but it did reveal that the team did not file charges against him because of a lack of probable cause, even though the team did believe it was likely a child abuse case.

On Thursday, Sept. 21, of this year, Gary told authorities Castel allegedly slapped her face on Sept. 13, when she was not able to open a window in their home, two hours before the 911 call, according to the affidavit.

The affidavit was redacted in some sections and it did not reveal what exactly Castel told authorities when they interviewed him twice, but the report did state that he “had admitted to a criminal act …”

Also is this him?

Apparently there’s a family bail bond company? Or was…?

First, he said it was a result of the Hurricane and it blew the baby down the steps. Later he said she must have fallen from inside the home, later saying he dropped the girl on accident.

Castell said he and the child’s mother were staying at a home because their residence had lost power during the brutal storm which was wreaking havoc on the region.

Who was really there for this baby? Isn’t she just adorable and so precious?  Smh

And if you notice, there’s quite a few baby mommas out there. I guess with his career or promising career in sports might have been the reason so many chick’s decided to hook up with him.  He was probably a star athelete in school and the girls just loved him.

He had just bought a home, but the address is different from where he killed this baby. 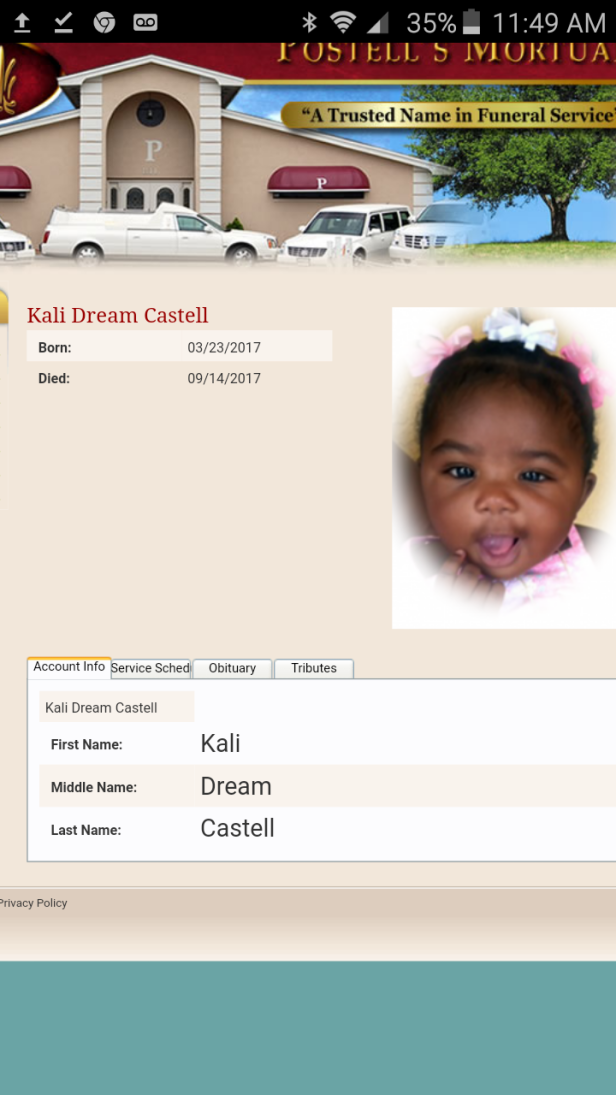