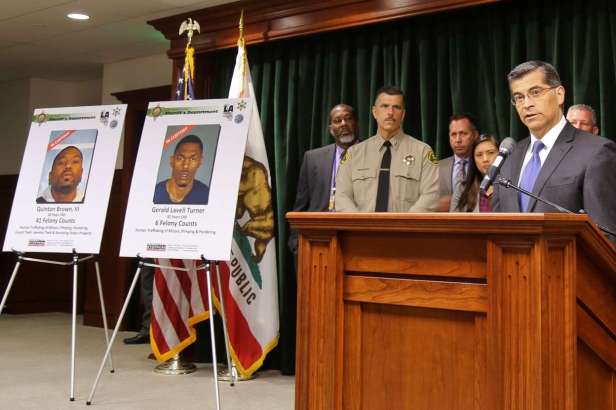 LOS ANGELES — Three people have been charged with pimping eight teens for commercial sex work in a ring that operated in California, Nevada and Texas, authorities said Thursday.

The teens, between 15 and 17, were lured into the commercial sex operation that solicited customers through postings on the internet, Los Angeles County Sheriff Jim McDonnell said.

Quinton Brown, 30, Gerald Lavell Turner, 32, and Mia McNeil, 32, face a total of 54 charges that include sex trafficking, pimping and identity theft, authorities said. It wasn’t immediately clear if they had attorneys who could comment on the allegations.

McDonnell, who was joined by California Attorney General Xavier Becerra and Tulare County Sheriff Mike Boudreaux, said the trio “sought to exploit children while defrauding their victims and other unsuspecting people.”

Investigators launched a probe in December after Los Angeles County deputies were called to an apartment in West Hollywood to follow up on a missing person report filed in Tulare County, McDonnell said.

The deputies found the missing teenage girl and two other adults in the apartment and later learned the apartment was being used as part of the human trafficking that included 13 female victims, including the eight teens.

Human trafficking has become “one of the fastest-growing criminal enterprises worldwide,” Becerra said.

Authorities say McNeil used stolen identities to rent apartments across California that were used as brothels and purchased luxury cars that were used to transport the victims throughout California and to Las Vegas, Nevada and Texas.

McNeil has not yet been apprehended, authorities said.