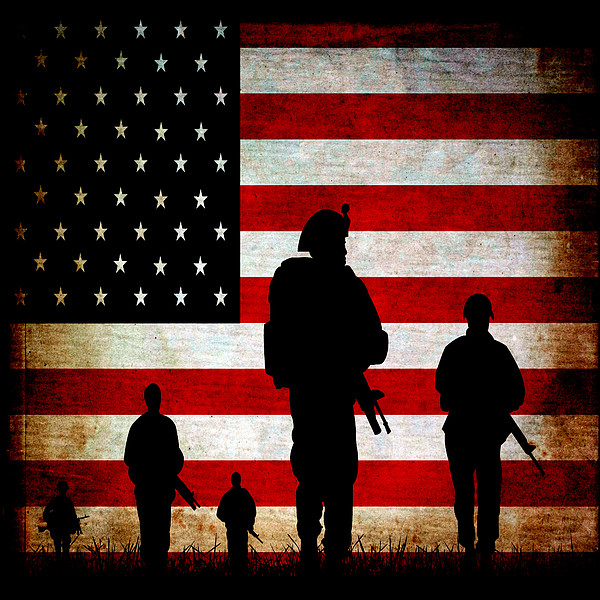 After consultation with my Generals and military experts, please be advised that the United States Government will not accept or allow……

….Transgender individuals to serve in any capacity in the U.S. Military. Our military must be focused on decisive and overwhelming…..

….victory and cannot be burdened with the tremendous medical costs and disruption that transgender in the military would entail. Thank you

So I’m guessing that he’s saying, those in the PROCESS of becoming transgender?

I’m trying to figure out whether I care about this or not and whether or not it makes a huge difference. Is this a form of discrimination?

But what if a person is fully transitioned? There are other reasons why a person wouldn’t be accepted in the military, so why is this such a terrible thing?

Just wondering… Thoughts? I just don’t get this.

Personally I think anyone WILLING TO FIGHT for their country should be able to join, unless they had a mental health or medical reason why they couldn’t. I don’t like the military. I hate it because I think they are unwilling pawns who don’t know what they are fighting for. BUT, if they want to fight, let them. Everyone has some sort of use.
Courtesy of A.P… Huffington Post

The missive comes after Trump’s defense secretary, retired Gen. Jim Mattis, delayed the implementation of the plan to accept transgender troops by six months. The decision came one day before the deadline for the military to update its medical standards to accommodate transgender service members.

The six-month delay was requested by the Joint Chiefs of Staff  and would allow a further review of how allowing transgender recruits to serve would affect the military’s lethality, Mattis said in a memo. That review was due by early December.

Mattis cautioned at the time that the delay “in no way presupposes the outcome.”

“Since becoming the Secretary of Defense, I have emphasized that the Department of Defense must measure each policy decision against one critical standard: will the decision affect the readiness and lethality of the force?” Mattis said last month in a statement. “Put another way, how will the decision affect the ability of America’s military to defend the nation? It is against this standard that I provide the following guidance on the way forward in accessing transgender individuals into the military Services.”

Under Defense Secretary Ashton B. Carter, the military lifted the ban on transgender troops and was given one year to determine how to implement a policy that would allow transgender service members to receive medical care and would ban the services from involuntarily separating people in the military who came out as transgender.

Thousands of troops currently serving in the military are transgender, and some estimates place the number as high as 11,000 in the reserves and active duty military, according to a RAND Corporation study that has been cited by the Defense Department.

Following Mattis’s announcement last month, Aaron Belkin, the director of the Palm Center, a think tank that has helped the Pentagon research transgender people serving in the military, released a statement condemning the move.

“For the past year, transgender troops have been serving openly and have been widely praised by their Commanders,​ ​as is the case in 18 allied militaries around the world including Israel​ and​ Britain,” Belkin said. “Yet members of Congress are denigrating the value of military service by transgender troops, and Service Chiefs are pressuring Secretary Mattis to continue the transgender enlistment ban despite having no new arguments or data to back up their long-discredited assertions.

“In light of the success of transgender military service, the extensive research confirming that inclusive policy promotes readiness, and the sad history of ‘don’t ask, don’t tell,’ loyally-serving transgender troops deserve to know whether Secretary Mattis stands by the claim he made at his confirmation hearing that LGBT troops can indeed serve in a ‘lethal’ military. Stonewalling on full inclusion will, just like ‘don’t ask, don’t tell,’ compromise military readiness.”

Richard Socarides, a longtime gay rights advocate who advised Bill Clinton on gay men and lesbians serving in uniform, called Trump’s decision “a tragic betrayal of all LGBT Americans and a shameful effort to win over social conservatives at the expense of the vulnerable.”

“But, what Trump will now learn: Don’t mess with us,” Socarides said. “This gets him a fight he will not win.”

Gay rights and transgender organizations have long threatened legal action against the Pentagon if it decided to roll back or hinder the service of transgender troops. Their legal and political advocacy successfully convinced Congress and President Barack Obama to repeal the Clinton-era “Don’t ask, don’t tell” ban on gay troops through legislation.

Trump’s announcement comes two weeks after the House rejected an amendment to the annual defense policy bill that would have blocked the Pentagon from offering gender transition therapies to active duty service members. Twenty-four Republicans joined all 190 Democrats voting to reject the measure.

But the issue has remained a pet cause for House conservatives who believe the federal government should not be funding gender reassignments. Conservatives have offered several amendments to a pending appropriations bill funding the military that would target transgender service members. But not would exclude them from serving entirely.

During the debate on the initial amendment, Rep. Duncan D. Hunter (R-Calif.), a member of the House Armed Services Committee, argued for the therapy restriction but explicitly stopped short of calling for an overall ban: “We’re not stopping transgender people from joining. We’re saying taxpayers in this country right now are not going to foot the bill for it.”

Ed O’Keefe and Mike DeBonis contributed to this report.