OK so about two years ago I wrote a blog about two missing boys in Florida. They went out on a boat and were never found. Their boat was discovered two days later capsized, but their bodies were never recovered. 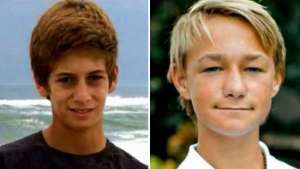 Perry Cohen and Austin Stephanos both aged 14 went fishing off the coast in a 19 foot boat unsupervised.

Now on this particular day July 24, 2015, the weather was sketchy. It was reported that skilled fisherman were heading back to shore, while these two boys kept going further in the opposite direction. The skies were getting darker from clouds and the winds were picking up.

According to the mom, the boys always took this trip. I’m assuming that the mom who did all the bragging about what a great survivor and explorer Her son was is perhaps the one being sued. She couldn’t see anything wrong with allowing boys to take a trip alone, without any gear or way to communicate.

Pamela Cohen is suing Austins family for negligence that resulted in the boys deaths. Apparently they’ve tried to move on and let things go, but the mother just can’t. So she hired an attorney.

According to Pamela, Austins family didn’t exercise due Care and were negligent by allowing them to go out on a minimally equipped boat with no radio or GPS.

Now the question is…
Who is really responsible for the death of Perry?

Perry was 14. He has parents as well. Why didn’t they teach him about safety and all of the possible outcomes from being stranded? Even if Austin didn’t have a phone or GPS, OR radio, why would your son take that trip? Most people don’t go anywhere without their phones, so I don’t expect Two teenagers from 2015 to be any different. This lawsuit won’t bring her son back. But it allows her the chance to place the blame. Shes trying to ease her guilt. But they are both to blame.

Both families fucked up. I had hoped that the boys would be rescued. I remember getting comments stating, ‘THIS IS THE WAY IT IS. That’s how we raise our boys. They are mature enough to handle themselves in any situation that would arise” on that out of touch boat from 1978.

Anyway, I’m curious to know what the outcome will be in this case.

Carly Black, Austins mom was allegedly aware that Perry’s mom forbade him to go out on a boat without supervision. Pamela also states that it took Austins parents two hours before they notified them of the situation. According to the report, Austins dad, Blu Stephanos went out searching for the boys on his own before telling the parents that they were missing.

You know. You can’t trust people with your kids. And I knew this case would get ugly. Because we have two boys who are presumed dead and nobody took responsibility.

Think about this though. Did Perry know that he wasn’t supposed to go out to sea without supervision? Perhaps he did and he CHOSE to disobey his parents. If we don’t have evidence that he was kidnapped and taken against his will, how is the lawsuit valid? Pamela needs to understand that she is equally responsible for what  happened to her boy.