I was supposed to write about this a few days ago but I completely forgot. And tonight I was doing more reading on the subject and it just came back to me that I was supposed to put this guy in the spotlight. I’ve been doing this for a while so I just say whatever I feel.

Cameron Gamble you seem like a whack job. Now for those of you who may not remember, Cameron was The Negotiator for whomever ALLEGEDLY had TAKEN Sherri. He made the video below and it was posted to Facebook. And after I watched the video I had a lot of questions for this guy. I was supposed to put down my thoughts in a blog but it completely slipped my mind. Tell me what you think.

Project Taken is hosting a two night training to equip and teach anyone, from college students to missionaries headed overseas, to live and thrive in any environment. The training teaches and equips on how to handle potential harmful situations through awareness, avoidance, or negotiation and escape. No matter where God has put on your heart, you will be equipped to bring Kingdom. You will be empowered to walk in a new level of courage and pierce the darkness with the light of God.

Ok now THIS IS YOUR VIDEO BROTHER.

Cameron Gamble and his wife are the founders of Project TAKEN, a unique organization focused on training missionaries and ministries to prevent, survive, and escape hostile situation. They empower missionaries by radically redefining courage and wisdom while in the midst of uncertainty. Cameron has been training the U.S. Military Special Ops community since shortly after September 11, 2001 on survival tactics. Their heart is to impart the same elite training, but with a supernatural approach for those who dare to pierce the darkness with the light of the Gospel. They work closely with Bethel missions, BSSM short-term missions, high-risk ministries involved with human trafficking and churches globally. Additionally, they offer in-country resolution for missionaries and ministries that are facing serious threats by traveling to the source of the problem in order to aid.

Thank you For sharing this link. Please watch and share. Cameron Gamble posted this 4 years ago.

So I started thinking a little bit more and you know how I think. And you know I was thinking from the beginning that this might be staged but I wasn’t really sure. So then I started thinking about this organization called Project TAKEN. And I started reading between the lines and thinking about exactly what this guy does for a living. Now I don’t know if any of you guys remembered that Sherri considers herself extremely religious and even considers herself a missionary. And so when I realize what type of work this guy actually does it made me think about how him showing up and inserting himself into the story actually benefits his business.

When I do a Blog like this I think of everything. I try not to eliminate anyone and I try to explore every possibility and every option. And I was supposed to do this on Thanksgiving but because of the holiday I just did not have time to get into it. But you think about this organization. You think about what I’m saying. Project Taken.

It’s the perfect name for an organization that would kidnap someone and teach them how to survive. Of course I’m not saying he did it, but I would be stupid not to mention this. And I wonder how many of you out there were thinking the same thing.

Do you know how many people were actually talking about the video that he created? Many people did not even believe the ransom existed. And there is no way I’m going to let this guy fly without putting him on my blog. I am sorry but I have to put you on blast. And then in your video you’re talking about you don’t want to hear anything about visions, but in your description of what you do, you mention Supernatural? What is that all about?

You are my readers. You tell me if this doesn’t make sense. If you thought I was done, you don’t know me. I will dig so deep. Lol

His business seems shady and thats why its here. All this god talk aint fooling me. I wanna know what is going on with this guy. 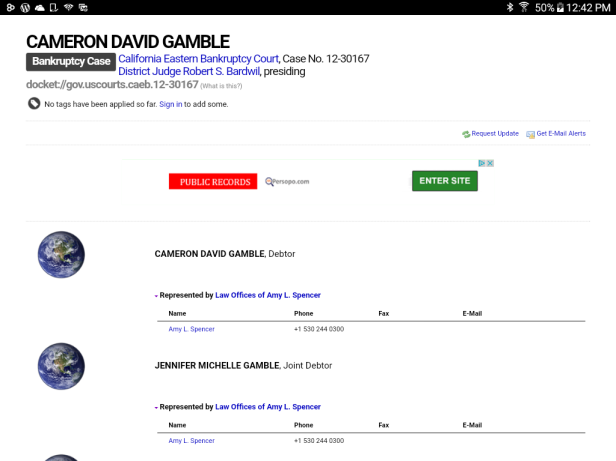 He also promises he isn’t working with law enforcement and will work with the kidnapper to securely and discreetly get them the money.

Shasta County Sheriff Tom Bosenko has cautioned that approach could make them a target of scam artists and if she were kidnapped for ransom, her captor probably would have contacted the family by now.

Gamble, however, said he hasn’t received any scam calls, but he declined to discuss what otherwise may have been received. While he agrees with Bosenko that the captor originally didn’t want money, he sees offering to pay an undisclosed ransom as a way to establish a dialogue and learn if Papini is OK, he said.

In addition, if the high-profile nature of the disappearance has the kidnapper having second thoughts, it gives him or her a safe out.

“We want to create an opportunity for them to release her,” he said. “They need a way to get out of this situation.”

An anonymous party who lives out of the area is funding the ransom and hired Gamble, he said.

Papini’s case also received help from the Federal Bureau of Investigation, although Gamble says he’s not working with any law enforcement.

“They’re not happy with us,” he said.

Since his identity is know, he would worry about retaliation if he did set up a kidnapper, though he said he understood concerns that her abductors would go free.

“At the end of the day, it’s not my job to bring justice to these individuals,” he said.

So far, the video has been viewed more than 2,400 times on YouTube and 67,000 times on Facebook as of Sunday night.

A $50,000 reward is also being offered for anyone with information that leads to her return, according to the Shasta County Secret Witness program.

Anyone with information about Papini is asked to call Secret Witness at 243-2319 or the Shasta County Sheriff’s Office at 245-6135.

They should not, however, call the phone number on Gamble’s web site: It goes to a disposable phone that doesn’t have call waiting so if the kidnapper calls while it’s busy, there’s no way to know, he said. Only Papini’s captors should call, he said.

So what was all of this for? Why was he in the picture? Why do we even know his name? What was the point of this whole negotiation Thing If It Played no Factor? The first red flag with this guy is the fact that I don’t see any testimonials, I don’t see any reviews I don’t see a legitimate website for him and his business. I’m finding out that he has filed bankruptcy he and his wife. So it does not make me feel confident in his abilities to do anything. Now we’re not talking about Donald Trump bankruptcy. That’s a whole nother story, we’re talking about the poor man’s bankruptcy LOL and that is an extremely different story.

I’m not saying that a poor man does not have the ability to do his job. Or that if he files for bankruptcy that he is incompetent. That’s not what I’m saying what I’m saying is if I don’t see a legitimate Footprint for you online as it relates to your business, then I can not call you a businessman. And if I have people coming on my site telling me that your business isnt registered with your state, then that further makes me doubt your credibility as a hostage negotiator.

And if you are not a legitimate businessman and if I don’t see your footprint and you’re not registered, then to me you’re nothing more than a scam artist. Yes I realize that there is what you call Street vending and underground businesses. Lots of Street vendors do not have their license but at least I can walk away with my hot dog or my pretzel or my rib sandwich when I’m done. IF I hire this guy, what will I walk away with?

Imma head on over to Bethel and start my subscription to pay for the FREE WORD OF GOD.

The ransom money offered for the safe release of a Californian woman who went missing three weeks ago may now go to her family after she was found battered but alive on Thanksgiving Day.

Sherri Papini, 34, was discovered badly beaten, restrained and dumped by the side of the road in northern Yolo County, more than 150 miles away from where she last seen in Redding, California, last week.

An anonymous donor, operating outside the family and without police help, had offered a $50,000 ransom to her captor for her safe return.

It was withdrawn and turned into a $100,000 reward for her whereabouts.

Seeing as the money went unclaimed, part of it may now be given to the Papini family to help support them, Sacramento Bee reports.

Cameron Gamble, a defense contractor who helps with overseas hostage situations, was hired by the anonymous donor to help negotiate. He said the donor still wanted to ‘support the family in any way he can to ensure they receive the necessary treatment for their recovery.’

Gamble said the amount that could potentially got to Papini and her family was ‘really up to him (the donor) at this point.’

Papini’s family said they had no involvement in the ransom but shared information about it on social media. Shasta County Sheriff Tom Bosenko said last week he did not believe the ransom played a role in her release.

‘There’s only one hero in this. It’s Sherri Papini. She found the key to stay alive,’ Gamble told the Sacremento Bee.

This dude will do anything possible to stay in the spotlight.  I honestly wouldn’t mind plugging his business,  but hes gotta do better than this.  And he needs the money more than they do.