Something is wrong here. Terribly wrong. This child went out at around 6:45 to purchase a coloring book. It was almost dark and raining. Who runs out to purchase a paper product in the rain? Also who ends up a MILE away from their house in the rain? This is a 13 year old girl. She is walking.

The parents Andrew James Schneider and Tina Mcgiffin Schneider are said to have been aware that she was going to the store. At least the mother knew. It is reported that a store clerk saw her talking to a man in a Buick, either Gray or Brown. I suppose it was difficult to see because of the rain, but yet the clerk was able to see the make of the car? Updated, it was the FATHER WHO claims to have seen this.

Regardless, Shevy Mcgiffin is dead and we have no answers. This story is too bleak.

I believe Shevy Mcgiffin was perhaps cornered. Perhaps her vision was obscured that rainy night. Her death is being ruled an accidental drowning, but was she lead or run down to her destination? What I mean is this. Was she being chased in a particular direction? There is absolutely no logical reason for her to be a mile away from her home. Especially when she is known for going to the store and going right back home after that.

The stepfather says that she has never run away and that she never would run away. And that he hated to say this but he believes that she was kidnapped. Now perhaps he is just saying that because he knows they would not issue an Amber alert for her unless she was kidnapped.

Also police haven’t confirmed that the vehicle that the cashier stated that they saw was even true. The story of the vehicle came from the father. But doesn’t it seem so coincidental though? Just so happens that when she leaves the house and heads to the store that a man is up there waiting for her?

I mean it’s raining out. It’s wet and the streets are wet. It’s night time or getting close to it. Shevy Mcgiffin is wearing sandals.

But what bothered me more than anything is a statement that the family made. ” We don’t know why this happened, but we don’t question God”. End of fucking story.

Why are you guys too quick to brush a death under the rug? Why is it so easy for religious folks to just walk away from the death of their child or grandchild and say it’s in God’s hands and I refuse to question it? What the fuck is wrong with you? Why do you think we have so many fucking pedophiles in the streets right now raping and molesting children and so many mothers and fathers kill their own children? Because people don’t give a shit and they hide behind God.

Is it so much easier for you just to wash it away and say God has it instead of actually caring? It’s really getting on my nerves. And I honestly don’t care if I have a religious following or not because for the most part you people are really starting to piss me off. I don’t understand what’s going on in your mind when you are so Heavenly minded but you are no fucking Earthly good. I mean seriously the average Christian does absolutely no good on Earth. Because they don’t care about anything. EVERYTHING to them is about praying and handing out cash and then they’re done. You can’t give your way into heaven if there was a heaven. You think you can just wipe every problem away with a few dollars here and there? Just because someone says I LOVE GOD OR HEAVENLY FATHER OR GOD BLESS YOU, DOESN’T MEAN, they are genuine.

It’s not supposed to be about just casting your burdens and problems to god.

You actually have to work. You actually have to do something. If your child is missing you don’t sit back on the bed and say “oh well let God’s will be done.” Actually some of you do probably. And that’s why bad shit keeps fucking happening to you. When you sit back and you act all timid and passive and you act like you have absolutely no power and no Authority that’s when you become a victim.

It’s a shame that I’m an Atheist and I know the Bible better than you guys do. You never heard the statement that God has not given us a spirit of fear but of power and of love and a sound mind?

I guarantee you if this blog site was full of a bunch of Jesus and worship and praying and fake God bless you and God loves you and God be with you I would have so many donations. But because I’m Atheist people turn their heads and say oh we don’t need to do anything for her. WE don’t need to donate.  We don’t need to contribute. But you say you’re not judging anyone. Even though I’m doing a good service. And actually trying to help.

I could be a religious fraud like the rest.

I’m starting to think that GOFUNDME should be changed to GODUMPME. BECAUSE everyone is capitalizing off of the deaths or disappearance of their child.

Do we have to kill our children to get help? I think this is the trend now.

I think people are starting to realize that children are extremely valuable. Dead or alive. And Missing children keeps you in the news and could possibly keep the money coming in.

I’m just going to go ahead and say, STEPDAD KNOWS WHAT HAPPENED. I was holding back, but nah. He knows. Sue me. Oh well. I said it.

Look, don’t get mad at me. I can look at this guy and tell something ain’t right. I don’t even know his history yet.

The thing about him that gets me is his emotions. Too much too soon. That’s right I said it. Men are too logical for that. Their emotions are always suppressed. They do that as a defense mechanism to be a pillar of strength for their other children or spouse. They have to be strong for HER. THIS guy is cracking way too soon. The day she is missing he’s already crying? No way.

Another thing? The FLYERS ARE DONE already? Boy these parents are REALLY on top of this disappearance. Today is Tuesday the 13th. She already had flyers printed on the 9th and 10th? A GoFundMe campaign already collected around $7,000 by Saturday and her body was found Sunday. That is the speed of fucking lighting.

I never knew of a faster more efficient way to get paid. 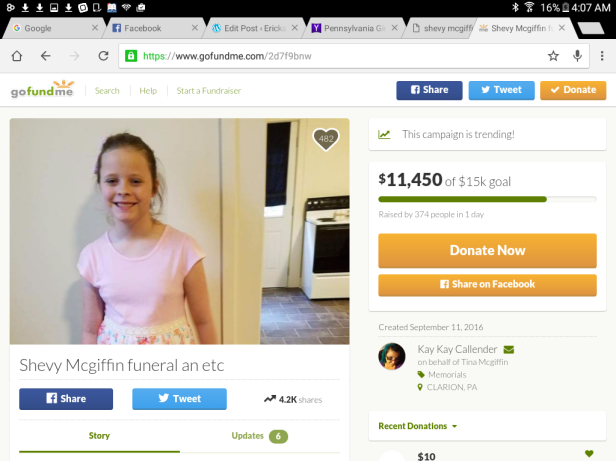 I put my campaign up about 2 weeks ago. No donation made at all. Not 1 penny. But when your child is missing or kidnapped or deceased, the money rolls in.

Think about it. These people will do anything to get paid.

My daughters are alive. I suppose that’s not good enough for a dollar. Lol

With the revelation that Shevy Mcgiffin is scheduled to be Cremated, is there a possibility that someone didn’t do their job well? It’s been 4 days and EVERYTHING IS DONE? Autopsy included.

… I LOVE U SHEVY MCGIFFIN TO THE MOON AND BACK INFINITY !!!!! PLEASE EVERYONE PLEASE PRAY FOR MY DAUGHTER

Something is not right. The INVESTIGATION IS NOT OVER. SO why are they in a hurry to cremate her? I suspect foul play. Yeah I know she drowned, but I’m not sure I’m buying it. According to the investigation, they aren’t exactly sure how Shevy got to the river to begin with. They don’t know why she would be there on a rainy night.

Video of the statement from the police department makes me think this case isn’t over.

Link below is of father speaking

We don’t know if there was a confrontation. We don’t know if the girl was next to the car and was snatched and the car drove off. Absolutely nothing and no way to determine how this father came to the conclusion that she was kidnapped.

Well I will tell you that it is common sense. The first thing is the vehicle drives off with your daughter inside the car. Or the vehicle drives away and leaves your child standing there. There are no other options. So what happened? What is the point of bringing up the vehicle if it doesn’t go anywhere? That is a dead end. Why would a father bring up a dead end? Can he actually see the store from his house? What proximity was he when he saw this older gentleman? How did the man look? If you know he’s older, how much older? No description was ever given. If he saw her talking to a stranger why didn’t he intervene? What is his vision like? He wears glasses. The thick kind. How did he see that far? It’s raining out and he’s wearing glasses. My glasses are useless in the rain. They don’t come with built in shield wipers! I wanna know why he saw his daughter then went back inside the house. I wanna know why he claimed to see her talking to a man but just ignored it. Unless he’s a fucking LIAR!

Reports are that the father searched the entire area where she was found for 2 hours and recovered nothing. However that’s exactly where she was. There is much speculation about this story and I hope it’s not over yet.

Shevys father contacted me today venting his frustration over my speculation. I would love to move past this but I just can’t. I can’t change what I feel. Could I be wrong? Yes. But I just haven’t had enough answers from them to give me peace.

Another thing. If they thought she was taken, why would they cremate her? Wouldn’t they want to find her kidnapper? They’d need DNA . SIGH…

There have been many reports that her sweatshirt was found on the bank of the river. That leads many people to believe there is more to the story.

Also The coroner, Terry Shaffer ruled it an accidental drowning, however the District Attorney says the death is considered a homicide until proven otherwise.

9 thoughts on “Who KILLED Shevy Mcgiffin?”